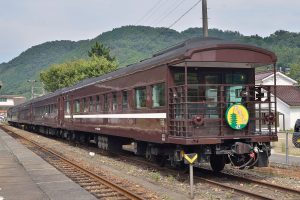 This vehicle has been made for replacement for type 12 passenger car steam hauled train named “SL Yamaguchi”. Development concept of JR West for this passenger car was “ Using the state of the art engineering while keep 1930’s Nostalgic appearance and Interior ” . Based on this concept, this train consists by classic style five cars. Both side of this train has observation deck, one side superior class and another side standard class. Total passenger capacity is 245 include superior class 23. For preserve steam train running is needed not only steam locomotive itself but passenger cars. To save passenger cars like this will be very important task. This train is one of the answer for solve these future problems. This is the one of the important reason why they were chosen. 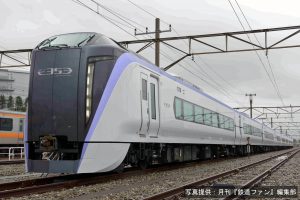 This has been made especially for Chuo Line, main line between Tokyo and Matsumoto. This Line in the mountains and has a lot of hard grades and tight curve sections. E353 has been developed to replace for E351 EMU “ Super Azusa ” which was used since 1993. Special feature of E353 EMU is tilted body system that is able to run faster on the tight curve section than conventional train. Other new technics are full active suspension system, New Train Information System (TIMS) and variable Voltage and Variable Frequency operation control system by IGBT semiconductor elements. The body is made of Aluminum. This series will be a new standard for mountain section in the near future. This is the one of the important reason why this was chosen. 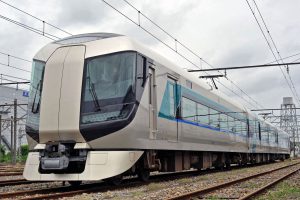 Type 500 EMU is Tobu Railway first time Limited Express Train since 1992. This train is used for both sightseeing and suburban special delivery, not only main line between Asakusa and Nikko, Kinugawa but local line like Isezaki line, Urban Park Line. Basic consistence of 500 EMU is three, however, this used mainly 3+3 then separate as two trains in the junction. Nickname is “ Revaty “ is coinage Variety and Liberty. Interior design is influenced from Edo era culture. The body made of Lightweight Aluminum double skin structure. Tobu Railway starts new Limited Express Service for local Line by this series. This creates new era for Tobu Limited Express, this is the one of the important reason why this was chosen. 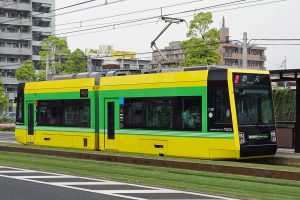 Kagoshima City Transportation Bureau has been using ultra low floor tram type 1000 since 2002. In 2007, type 7000 has developed as new series. Type 7500 is developed as successor for 7000 and produces two cars.
This tram is consisted two bodies two trucks type articulated tram made by steel. This tram is Ultra low floor car which is 350mm lowest section while wheel has axle. That can use conventional system which makes production and maintenance costs lower. Even though floor height of above the truck is 465mm, this height is one of the lowest in the world that has axle wheel. And these floor sections connected by slope not step. New display system sets inside, guide by four languages for foreign passengers. This tram is developed for new Ultra low floor tram system and expected wide evolution. This is the one of the important reason why this was chosen.

Please ｓee below for further informations.