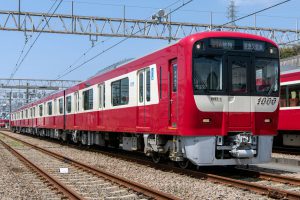 Keikyu Corporation type 1000 (series 1890) EMU is 20th additional products of type 1000 that started service in 2001. Body structure of this train made of stainless steel, length 18 meter long, 3 doors on one side. Painted red and white color scheme like other Keikyu members.

Interior design follows previous type 1000 as white color based bright image space. Seat is the most distinctive feature of this car. It can be transformed between long seat and cross seat. When it used as ordinary commuter train, long seat has been used. And when it used as seat assigned commuter train, cross seat has been used. For the better service for the passenger, restrooms, space for wheel chair and wide space are adopted. This train consists with 4 cars.

Keikyu Corporation type 1000 (series 1890) EMU has a lot of new feature such as special seats, restrooms and control systems. And this train can be used not only commuter train but for special excursion train, event train etc. The BR&LPSC evaluated this extreme-highly completeness of them and chose it in Blue Ribbon Prize. 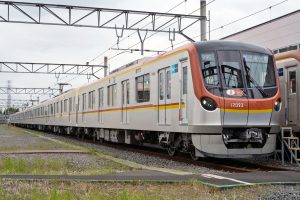 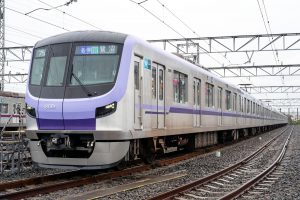 Tokyo Metro type 17000/18000 EMU are produced as replacement for the existing series such as 7000 for Yuraku-cho and Fukutoshin Line and 8000 for Hanzomon Line. 17000 revenue service started Feb. 2021 while 18000 Aug. 2021. These are the different series but a lot of common feature such as outer design, interior accommodation.

The outer design is influenced by previous model but more sophisticated. They featured with line symbol color such as Yellow for 17000 and Purple for 18000 used not only outside color scheme but interior coloring. 17 inch liquid crystal monitor and security camera equipped for each car for passenger service.

The body is made of the double-skin structure of aluminum alloy, and strengthen for offset impact.

As mentioned above type 17000/18000 has realized the upgraded interior and use for common basic parts make maintenance easier while distinguish each series. These are why the BR&LPSC chose them in Laurel Prize. 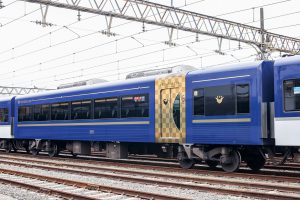 The limited express of Keihan Elec. Rwy. has started Sep. 1st 1950. Since then many feature adopted such as special color scheme, symbol mark of Dove, on board TV, air suspension etc.. Among them conversion cross seat has continuously adopted since history started. Previous “Premium Car” type 8550 started seat assigned revenue service in 2017, was first service in Kansai area. Despite doubtful expect that service was success beyond expectation. This 3850 is additional equipment for upgraded service.

The body is made of the double-skin structure of aluminum alloy, and strengthen for offset impact. Accomodation is based on high class, high grade image. The Carpet designed traditional “Karesansui”. Seats are equipped two rows and one row, seat pitched 1040mm. Some seats has back support heater operation individual by passenger.

As mentioned above the realization of the high traditional concept and comfortable passenger accommodation, BR&LPSC chose this 3850 as Laurel Prize.