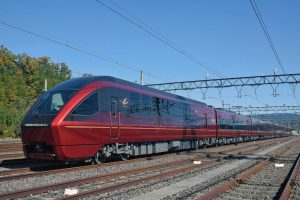 Kinki Nippon Rwy. Co. type 80000 EMU is the new express train for replace of type 21000 EMU & type 21020 EMU that had operated between Osaka (Nanba) and Nagoya since 1994, and started revenue service on March 2020 as the nicknamed train《Hinotori》.

Body structure of this train made by steel adopts lowered the floor level of passenger cabin and minimized the step of floor and platform, and the top part of this train adopts the structure of shock absorption. And the body painting stacks the clear layer on the metallic layer and finishes it.

This train consists with regular(standard) class and premium(upper) class. The leading car named as《premium car》is premium class and has the raised floor structure and situated deluxe three row seat made by leather, and the café-spot is set at the passenger deck. The middle car set regular class is equipped with one row 4 seats using the antibacterial deodorant seat cloth with the function. This accommodation realizes the comfortable trip by train.

For the driving unit, main driving motor is the 3 phase own cold expression basket form induction motor of the PG sensorless structure and latest VVVF inverter control unit, and the energy saving and the reduction of the maintenance are realized.

Type 80000 EMU has realized the relaxing comfort and the moving space of the high quality and high-performance, and furthermore has responded to various use such as sightseeing or business. The BR&LPSC evaluated this extreme-highly completeness of them and chose it in Blue Ribbon Prize. 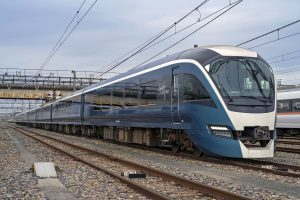 The formation of this EMU is composed all green-class (first-class) car, and the first car is especially accommodated as the premium green-class car with duel one row seat arrangement. The second & third car are the private room type green-class car and the fourth car is cafeteria car.

For the technical characteristic, INTEROS (INtegrated Train communication networks for Evolvable Railway Operation System) is adopted as the express train of JR-East.

The body is made of the double-skin structure of aluminum alloy, and the ceiling windows of all cars create bright cabin space.

Type E261 EMU has realized the relaxing comfort and the moving space of the high quality as the sightseeing train, the BR&LPSC chose it in Laurel Prize. 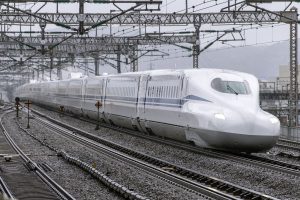 As the big refinement of type N700S EMU, the constitution of flexible car quantity of the train set is enable by pushing forward reducing the size and weight of the under floor equipped apparatus and reexamining the placement of the apparatus.

Concerning outside view of this EMU, traditional blue & white color scheme of Tokaido Shinkansen and symbol initial S (means supreme) is painted. As mentioned above the realization of the high technical concept and comfortable passenger accommodation, BR&LPSC chose this N700S EMU as Laurel Prize.