Both awards were decided by the Blue Ribbon Prize & Laurel Prize Selection Committee of JRC (BR&LPSC). BR Prize chosen based on the club member’s vote as the best rolling stock, while Laurel Prize by discussion of BR&LPSC members as recognizing excellence equipment. 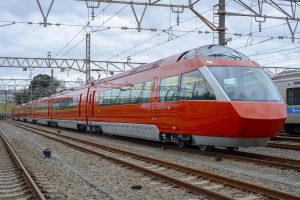 Type 70000 EMU, for the limited express service, started revenue service in March 2018 since type 60000 EMU which started revenue service ten years ago. Nick name of this 70000 is GSE stand for “Graceful Super Express”. This EMU consists seven cars, overall length of each car is 20 meter which adjust for platform door. The 70000 colored vivid Rose vermillion lively. 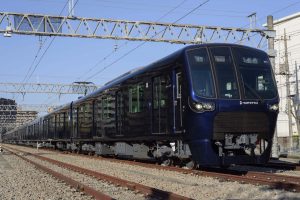 Type 20000 EMU is made for through operation to Tokyo down town from Yokohama area pass through by the Tokyu Shin-Yokohama Line which complete latter 2022. Design concept is based on Sagami Railway Company’s CI concept “Design Brand-up Project” influenced to front deign, room light, body color called “Yokohama Navy Blue”.

The passenger space of 20000 is unified in a gray tone, and the all long seats (seat set along the side body) placed establishing the universal design seat and the free space in the car end.

BR&LPSC awarded one of the Laurel Prize to this 20000 because of above reason. 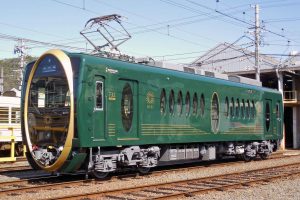 Prototype deo-730 debuted in 1988 adopting the high efficiency driving system of Cardin drive, and equiped the air-conditioning system and autocrat driving. This time, no.732 electric car body completely refurbished except the underframe and framework.

The gloss dark green body color remind us the deep forest of Mt. Hiei-zan, and the impressive elliptic design which used many parts images “a mysterious atmosphere” and “the dynamism beyond the space-time” along the Eizan line, and the gold color stripe of side body images the mountain fog of Mt. Hiei-zan. The front mask design which illumination is placed in the front elliptic ring inside is very original and harmonizes with the cityscape of tasteful North Kyoto. No.732 car adopts the long seat which is useful for commuting transportation, and also for the sightseeing use is considered. No.732 renovates as the reuse of the main driving motor and bogie from Keihan Electric Railway type 5000 EMU.

Type 730 (no.732) has fixed the tourist train which needs no extra charge on the Eizan line, and has evaluated the contribution not only the visitor from the inside and outside the country but also the commuting transportation, and BR&LPSC selected type deo-730(No.732) as the 2019 Laurel Prize